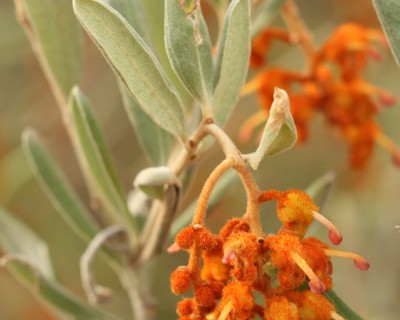 An untidy shrub growing to roughly 1.5 metres in height. Leaves vary between populations but are generally oval-shaped. In some populations, both upper and lower surfaces are grey-green and woolly or felty. In others, the upper surface is darker and smoother, though still hairy. This latter is more common near Wagga Wagga. Flowers are rust-coloured and woolly, but otherwise resemble those of other Grevillea species. A woody pod follows. Two elliptical seeds are dropped from an opening at the base of this pod soon after ripening.

Seeds germinate without pre-treatment but germination may take several months and can be unreliable. Ensuring an adequate seed supply may be difficult as seed drops soon after maturing. Propagation from cuttings is effective.

Flowers are often present year-round but are more numerous in spring.

© 2021 Wagga Flora. Initial planning of the nursery project was carried out by Peter Orchard and David Orchard. Original booklet was prepared by David Orchard. Website created by Christopher Orchard. Photography by David & Christopher Orchard. 'This website will be further developed to incorporate experimental data emerging from a project 'Using agronomic principles for understorey restoration' assisted by the New South Wales Government through its Environmental Trust.