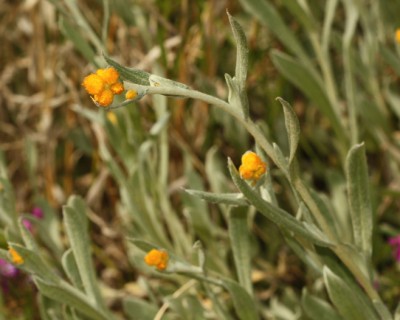 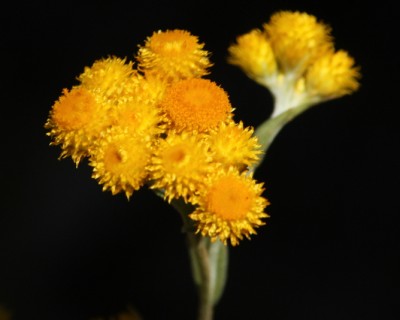 Highly variable forb which may be divided into multiple species in future. Two distinct varieties are known from the Wagga region. The first is a low-growing (to 30 centimetres) forb with densely hairy, grey, linear or lance-shaped leaves. This form tends to occur in dense, spreading patches. The second variety is taller (to 60 cm) with broader, rounded leaves which tend to be green on top and paler underneath. This form tends to occur as single plants, though it may be a dominant understorey species. All varieties have a crown of yellow, button-shaped flower heads. These are larger than those of C. semipapposum but less numerous. Other varieties, including intermediates, may also occur locally. Flowers are followed by tiny, dark seeds which carry a plume of fine hairs to allow for dispersal by wind.

Seed will germinate without pre-treatment but is unreliable. Success has been reported from cuttings.

Common by well-preserved roadsides and in many local reserves

© 2021 Wagga Flora. Initial planning of the nursery project was carried out by Peter Orchard and David Orchard. Original booklet was prepared by David Orchard. Website created by Christopher Orchard. Photography by David & Christopher Orchard. 'This website will be further developed to incorporate experimental data emerging from a project 'Using agronomic principles for understorey restoration' assisted by the New South Wales Government through its Environmental Trust.